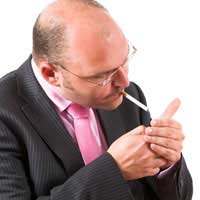 Smokers are facing ever increasing restrictions as the government ramps up its Cancer Strategy Campaign. Cigarettes are legal but smokers are now in danger of being seen as social pariahs with diminishing civil rights.

What Are The Government’s New Anti-Smoking Measures?

The government has announced a 10 year plan to decrease the number of smokers from 21% to 10% by the year 2010. Under the new strategy the government plans to decrease the eight million smokers in the UK to four million. The smoking ban in public places has generally succeeded but now the plan is to forbid smoking in the entrances of public buildings. Health is the main aspect of the government’s strategy, and to prevent one person’s choice interfering with another's.

Are People Unhappy About the Government Anti-Smoking Measure?

The initial smoking ban was greeted without much resistance in the UK. It does seem that smokers in the UK are not putting up too much of a fight when it comes to anti-smoking measures. Tobacco manufacturers and smokers’ lobby groups such as Forest are understandably unhappy. They claim that the new measures will do nothing to decrease the number of smokers and will simply mean the introduction of more laws that will discriminate against smokers.

Is The Smoking Ban Working?

In terms of people not smoking at work or in public places, such as bars, the smoking ban is working. There are around 2.1 million fewer smokers in the UK than there were 10 years ago. Whether this figure has been boosted by the smoking ban is unclear. An important statistic is that smoking in the 11 – 15 year old age group has decreased by 50% in the last decade. Passive smoking is also an emotive issue with some claiming that smoking around children can be classed as child abuse. This is one area that most people agree should not be allowed to continue.

Are Smokers Being Turned Into Social Pariahs?

Many smokers feel that this is certainly the case and some claim they are now being treated like second class citizens. Anti-smoking advertising that focuses on the unhealthy aspect of smoking is designed to make smokers realise what could happen if they continue. But anti-smoking adverts also focus on the unhealthy look of smokers including bad breath and wrinkled skin, and the issue of passive smoking. Smokers are increasingly being ‘shamed’ into quitting smoking, whether they want to or not.

In terms of health there is no doubt that quitting smoking will have some benefits. But smoking is a legal drug and the question of decreasing rights is an issue. The statistics given state that seven out of ten smokers want to give up. This still leaves the three out of ten who do not wish to give up their habit or be forced into giving it up. Many smokers say that if the government are so negative towards smoking they should ban it altogether and stop making money from the cigarette taxes.

How Are Smoker’s Rights Being Taken Away?

Prejudice against smokers seems to be growing and there are many companies who will not employ smokers. There have been cases of smokers being fired from jobs after they were caught smoking off premises. Some companies will not employ smokers even if the smoker promises not to smoke during work hours. Other companies forbid employees to smoke when wearing company uniforms, even when off duty. Companies have been known to extend their no smoking rule to half a mile outside of their premises.

Employers are forbidden to discriminate against employees on the grounds of race or religion but smoking is another matter. Employers are completely within their rights not to employ smokers, and in certain circumstance can dismiss them from the workplace. Again this does seem to be a clear case of discrimination against smokers in much the same way as landlords refusing to rent properties to smokers. Around 30 states in America have now passed legislation that prohibits employers from discriminating against smokers.

Will Smoking Be Banned Altogether?

It’s doubtful whether smoking will ever be banned altogether. Smoking is a lifestyle choice and banning the habit would take away the smoker’s freedom of choice. Although many smokers want to quit, nicotine is one of the most addictive substances and is extremely hard to give up. Banning smoking altogether would no doubt be one step too far in eliminating the rights of smokers.

Airport Body Scanners a Breach of Privacy?
Share Your Story, Join the Discussion or Seek Advice..
[Add a Comment]
I don't know if this is solely based on the UK, but I'd like to put my 2 cents in either way. I feel as though, in a world so full of politically correct nonsense, anybody that smokes is now being shunned into a corner. There is no denying that most governments are literally shaming and demonising anyone that smokes. They're actively, openly, creating a minority. In this country, the government makes billions of pounds a year on tobacco products. Cancer costs them billions. Now I don't remember the figures off the top of my head, but last time I checked, the difference between cancer cost and tobacco profit is also in the billions. They claim that they essentially want everyone to just quit already, but this country would sink if it didn't have the enormous taxes they receive from it. It's all a damn ruse, they say they want us to quit and that it's bad for us just so they can justify the ridiculous taxes and continue reaping the crazy profits. Should there be any sort of group targeting freedoms and rights of a person who smokes, I'll be first in line to join up. Gonna start growing my own too, which at the moment is a naive pipe dream, but I'm more than determined to put the effort in and learn how, so it's not all bad lol. If I had it my way, we'd all go back a little and stop relying on them so much, I mean.. If we all grew and smoked our own, theyd lose their money. Then it wouldn't be long until the pro-smoking adverts started appearing on TV again..
Pedro - 2-Dec-17 @ 6:12 PM
To me it seems smokers are a minority that people are being allowed to discriminate agianst due to the campaign that has spread misinformation using junk science and skewed interpertations. Smoke free areas I understand but now in GA some employers now require you to be smoke free for atleast six monthes before you can be hired. The way things are going we would need an organization where smokers come together to fight for a basic American freedom. People always look for things to hate and you cannot be politically correct and hate anyone but smokers. The goverment spends tax payer dollars funding hate and discrimination to the point where smokers are second class citzens. So smokers are a group of people who share a common belief being targeted for elimination. Land of the Free
Bruce - 15-Jun-17 @ 11:26 PM
Let say that smokers are more exposed and cannot hide smoke coming from cigarettes but people high on marijuana or drugs are far more dangerous at workplace but it is no real effort to control drug abuse at work we smokers are making the same profit for our companies but only we are pushed to comply with law if you are a weed killer(weed smoker) and smoking if all the time outside working hours nobody cares. One legal addiction is controlled constantly other illegal addictions are neglected. Different measures for smokers because we are soft and we feel guilty or something similar.
Hun - 3-Apr-17 @ 2:01 PM
we are an endangered species! Booze and Pot are or becoming more prevalent in today's society. they have many of the same health issues.they are considered a personal choice. There is a short story about what is called the 10:00 o'clock club I believe its a Dean Koontz short tail about the last people that smoke and what they discover. it makes one think!
deak2828 - 9-Sep-16 @ 7:58 PM
I absolutely agree with Karen's comment regarding doctor's attitudes to smoking. My doctor blames every ailment I have on smoking, I feel so much like a fourth class citizen when I need the doctor that for about a year I have put off going. They bully and cajole patients into giving up, we are made to feel guilty and I only expect to be looked down on with scorn at my surgery.The hypocrisy of the government regarding smoking is astounding, they want the massive taxes they get from smokers, but then inform doctors to treat us like we are scum. If the government really want to stop everyone smoking, they should make tobacco illegal (but they don't want to look like a bunch of dictators, so they make smokers lives a misery at every turn).
Susan - 10-Apr-11 @ 5:14 PM
Although, as a smoker, I don't have a problem with smoke-free areas, I do have a problem with the way the government has encouraged smokers to be viewed so negatively. Smokers are still human beings and do far less damage than alcohol and drug abuse yet smokers face much harsher treatment.I also object to doctors who have the attitude of trying to make every ailment smoking related whether it is or not. They even try to deny treatment until you stop smoking. As a high tax band person and given the amount of tax on a packet of cigarettes (in excess of £5 per packet), should I be admitted to hospital, I expect a gold plated standard offered to me, not discrimination. How do we go about changing this?
Karen - 23-Mar-11 @ 7:57 AM
Title:
(never shown)
Firstname:
(never shown)
Surname:
(never shown)
Email:
(never shown)
Nickname:
(shown)
Comment:
Validate: