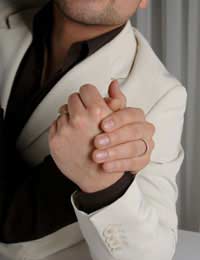 When the British government introduced new legislation in 2005 it placed civil partnership rights on almost equal footing with marriage rights. The Civil Partnership Act 2004 gave same sex partnerships certain legal rights that were not previously available under the law.

With the introduction of the Civil Partnership Act 2004 the government recognised the rights of same sex couples. Civil partnerships cannot be called marriages under the new law but civil partnerships that are registered will be recognised by the law, and rights will exist for the partners. Prior to the Civil Partnership Act same sex couples were not recognised under the law. Even if they were registered as a couple they did not have the same legal status as married heterosexuals.

Same sex couples who are registered now have many of the same legal rights as those granted to married heterosexuals. These rights will include:

When the Civil Partnership Act was introduced there was protest from certain sectors. Certain Christian groups were angered by the new legal status granted to same sex partnerships. Christian groups felt that gay partnerships undermined the traditional views of marriage. Others felt that these rights were unfair towards long term relationship couples who were not married and do not have these rights.

In terms of civil rights, the civil partnership rights issue is similar to the struggle for equality with regards to other cases of discrimination. There will always be groups that are opposed to the freedom and equality granted to others. Although there are protestors such as Christian organisations, there are also groups who feel that the partnership act is not equal enough. The fact that there is no actual mention of the word “marriage” in this legislation means that the fight for equality for same sex couples has still not ended.

Co-habiting couples should make themselves aware of the rights that exist with regards to property and child maintenance. A campaign called ‘Living Together’ is available on the Advicenow website. This website has information and advice on the legal rights that exist for couples who live together on a long term basis.

Anyone who supports equality and freedom will support the fight for equality that led to the Civil Partnership Act 2004. The introduction of this act is another step towards a more equal and free United Kingdom. At this time the government does not permit the use of the word marriage when it comes to same sex couples. For many civil rights activists the struggle for equality for same sex couples will not be over until this issue has been addressed.

Airport Body Scanners a Breach of Privacy?
Share Your Story, Join the Discussion or Seek Advice..
[Add a Comment]
My 48year old son evicted from his house he shared with his Fiancé of 11 years. His name not on the deeds although he paid a lot of money into her account over the years to pay mortgage. They have 8year old daughter.On 14th October he gathered his belongings off the front lawn, borrowed a van and took them to a friends room. Before he left he ask d to Police Officers if he. Could return for his car later (she had taken out a non MolestationOrder against him). They told him He could return for his car.He moved it off the drive of the house. When hereturned severalhours later to collect his car he was Arrested. For Contact and pestering!His fiancé had called the Police. He did not see her.He was sat in his car when he was Arrested.At the Police Interview he repeatedly told interviewing Officers about being given the all clear for him to coll ct his car.He also told them there were Witnesses to this effect.They ignored it all and a. Order made against him for breach of NMOI made formal complaint to Thames Valley but nobody would give me an answer as to why witnesses were not contacted. We now have signed witnesses forms. One Officer completely changed his Story and blatently lied to me.The Inspector was very condescending and evaded my questions.I would like to have this stopped going to trial, he has already pleaded Not Guilty. They are saying the original Officers "don't remember" what they said.This is ruining my Sons Life.He is also so worried for the safety of his daughter being left without him to look after her as his Fiancé is an Alcoholic
Tina - 22-Nov-17 @ 1:36 PM
My sons, in their early twenties, are marijuana users. The police arrested them for possession in January this year & released them on bail. We have had three subsequent police raids on our home, where they have been arrested for being in possession. The police are attempting to profile them as suppliers of marijuana, however the quantities do not reflect this. The entire house is searched, including my underwear drawer. The rooms are left like a tip, my cream carpets left filthy. Social services have been notified by the police, due to our daughter being present during the raid, stating emotional abuse on our part for exposing her to the raid. As parents we feel harassed, our sons are constantly having the bail extended & our lives are at a stand still. What can I do to stop the harassment. Surely the police cannot keep smashing down the door of our five bedroom house, violating our privacy, with no end in sight? Please advise.
MaxSup - 25-Nov-16 @ 11:55 AM
assulted by four police officers from west brom for breaking up a fight with a group of lads
nick - 6-Sep-16 @ 10:52 AM
I have had enough of my complints not been taken seriously when others have got other peeoplesw toys which a parent hav brought over the years as single parenti have also been beten upoover the years and i have just about had aenough of this abuse I get yes it is petty and yes it is small and I know that i have been on thetimes many years ago i was beaten up and i have beaten up agin and laot of people did ignore my please of help even against others jumpming over fences and also getting hired help or others to harress or do other things deliberatly I have also been in and out of hospital cause of the hired stuff and i have also hadI have noticed that cost of things have absoutly gone sky high and others crossiing over to cause a scance as usuall.
bummer - 22-Oct-15 @ 4:59 PM
@lobe. The police seem to have given you good advice, you should always try to resolve things and mediation often works. Ignoring them would also be advisable unless they are physically violent. If you wish to complain about the police response you should investigate doing so via the Independent Police Complaints Commission.
CivilRightsMovement - 14-Apr-15 @ 9:50 AM
I have neighbours that have complained to the police that my son has been shooting an air rifle over their back fence. The officer came round with a crime report to speak to us. Points I want to complain about are, she gave no name or police number. Did not show us the complaint or take any notes. Had incorrect info on her report my son does not or has never owner an air rifle (yet neighbours do), he is 20 and not 16 as in her report. She asked when we fell out with neighbours, I explained they wanted to build extension on the party wall and I said no. We have been treated and intimidated by them, eggs thrown at cars and stereo on loud many times. I explained this to the police officer but she was not interested, she seemed to favour neighbours and suggested that we went for mediation or just ignored them. I was left upset and angry that any of my side of the story was not listed to and feel vulnerable in my own home. What can I do about this. PS, they also have CCTV cameras that overlook Intl my garden even though they say they don't, they seem to know what I do and say. I feel I am being spied on. Help please.
lobe - 10-Apr-15 @ 11:19 PM
Title:
(never shown)
Firstname:
(never shown)
Surname:
(never shown)
Email:
(never shown)
Nickname:
(shown)
Comment:
Validate: