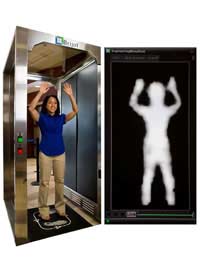 Full body scans used at UK airports have been criticised by civil liberties groups for breaching privacy rights. But this has not stopped the authorities from enforcing consequences such as banning passengers from flights if they refuse a full body scan.

Full body scanners have been in use in some UK airports since the summer of 2010. These devices are aimed at improving security on flights and designed as an anti terrorism measure. These scanners were introduced after a failed bomb attempt on a transatlantic flight on Christmas day 2009. The body scanners are being rolled out at major airports across the UK and are already in place in Heathrow, Manchester and Birmingham. Many people simply view body scanners as necessary security measure but civil liberties groups do claim they are an infringement of privacy rights.

Many passengers believe that if they have nothing to hide they have nothing to be concerned about. But the first passengers to use the scanner did have mixed reactions with some claiming that the scan felt incredibly intrusive. The biggest misconception, according to airport security staff, is that the scanners will show passengers naked. According to security employees this is not the case, although photographs of the images taken from the body scanners are extremely revealing. The images taken from the full body scans are deleted as soon as the scan has been undertaken.

Alternatives to a Full Body Scan

Undergoing a full body scan at airports may not actually be the end of the airport security checks. If for some reason the scanner cannot make a full assessment of the passenger then a strip search may be necessary. Passengers will then be required to enter a private area where they will be asked to explain any abnormalities. If security officials are still not satisfied the passenger may be required to remove layers of clothing until the security officials are satisfied. Passengers do have the right for a body search to be made by members of the same sex.

Anyone who is chosen for a full body scan at a UK airport and refuses will be banned from the intended flight. There is no alternative method of security search available to passengers. This consequence extends to every age group, and the exemption for under 18s that was in place has now been removed. Civil liberties groups are critical of this infringement of rights especially since no alternative to the full scan has been set in place. Members of the public who have refused the scan on religious grounds have been banned from flying.

A code of practice has been drawn up by the Department of Transport on the use of full body scanners. Rules for the use of the scanners include:Although there has been an outcry from civil liberties groups the airport full body scanners are set to stay in the UK. Passengers have a choice if they are selected for screening, and that choice is comply with the screening or be banned from flights.
Next Page