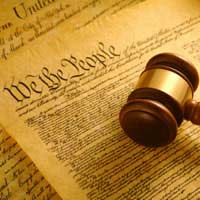 The Civil Rights Act 1964 was legislation introduced by President John F. Kennedy in 1963. Its intention was to eliminate racial segregation in public places throughout America and to outlaw discrimination.

The Need for the Civil Rights Act

The Civil Rights Commission had been analysing civil rights issues in American and had come up with some disturbing statistics. They found that the African American life expectancy was seven years less than white Americans. Over half of African American housing was found to be unacceptable and it was practically impossible for an African American to obtain a mortgage. Racial segregation and employment discrimination were also widespread especially in the South and the economic gulf between black and white Americans was widening.

History of the Civil Rights Act 1964

The actual seeds of the Civil Rights Act 1964 were planted by President John F. Kennedy during his civil rights speech on 11 June 1963. Kennedy requested legislation that gave all Americans, black or white, the right to use public facilities such as restaurants, theatres and other such establishments. Kennedy sent the bill to congress on 19 June 1963 but on 22 November 1963 Kennedy was assassinated and never saw this legislation come to fruition.

Kennedy’s vice president Lyndon Johnson was sworn in as president and felt he owed it to Kennedy to try and push the Civil Rights Act 1964 through congress. The mood after Kennedy’s assassination meant that any attempts to damage the bill would be seriously objected to. However, the bill was met with much opposition especially from Howard W. Smith, chairman of the rules committee. It was Smith’s intention to keep the bill on hold indefinitely and it was not until the 2nd July 1964 that the Civil Rights Act of 1964 was passed as law.

Included in the Act

There were a number of laws included in the Civil Rights Act 1964. These included:

Opposition to the Act

There was widespread opposition to the Civil Rights Act 1964 especially in the South of America. Federal funding would now no longer be given to schools that still used segregation. Companies that wished to trade with the government would need to have a charter that was in favour of civil rights. Any company that discriminated would not be permitted to conduct business with the government. Some African Americans also opposed the Act claiming it did not go far enough and seats were demanded at the Democratic Party Convention held in Atlantic City.

The Civil Rights Act 1964 was followed up in 1968 to prohibit discrimination when it came to selling or renting property. The act prohibited any type of such discrimination on the grounds of race, colour, religion or country of birth. The outlawing of discrimination of disabled individuals or families with children was also added to this act. It is thought that the assassination of the civil rights leader Martin Luther King aided the passing of this bill.