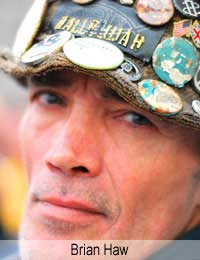 Many people have called Brian Haw, 60, an icon of the UK peace protest movement. But his eight year long protest in Parliament Square has made him a few enemies, not least the politicians he verbally lambasts on a daily basis.

Brian Haw’s peace protest started on June 2001 and has been running for over 3200 days. What started out as protest against the economic sanctions of Iraq has now encompassed the war on terror and the Afghanistan War. His protest is a voice for the innocent victims who have died in wars such as Iraq. Although his protest is a peaceful one he has been harassed by the police and aggressive individuals on numerous occasions.

Brian Haw set up his tent on the streets of Parliament Square in 2001. Many people have tried to remove Haw from the square and in 2002 he won a victory in the high court when Westminster Council tried to have him evicted. According to the judge, Haw was within his rights to exercise freedom of speech and he was not causing a pavement obstruction. Prime Ministers Tony Blair and Gordon Brown have both tried and failed to have Haw removed from his protest spot.

Continual Harassment from the Police

Over the course of his eight year protest Brian Haw has faced continual police harassment and been arrested on numerous occasions. In 2006 the police crept quietly to his protest site during the night and removed his banners and signs. In another victory for Haw, a High Court judge ruled that the police’s actions were unlawful. In an ironic twist, Haw’s entire protest camp was recreated by Mark Wallinger just before the police unlawfully removed it. The ‘State Britain’ installation was unveiled at London’s Tate Gallery in 2007.

Brian Haw’s Arrests By the Police

In January 2003 he was arrested by transport police for assault, at the time of the arrest he was sitting quietly having coffee. Haw’s January 2003 court case was thrown out of court. In April 2003 the police again arrived to crush Haw’s protest signs. The police later apologised and Haw received £2000 in compensation. In 2004 Haw was arrested and his camp removed, the next day his display was dumped back onto the pavement by the police.

In 2004 Haw was again arrested as a security threat and his display was dismantled, these charges were later overturned. Haw has been arrested multiple times since the 2004 arrest and has won every case in court or had the charges thrown out.

Assaults on Haw by the Public

Although Haw is considered a hero and an outstanding individual by many, there are those who would like to see his protest disappear. Many politicians have tried to have his camp removed and Conservative leader David Cameron has vowed to rid Parliament Square of Haw’s protest site. He has been assaulted many times by both British and foreign members of the public. In 2003 an American employed at the US Embassy assaulted Haw and broke his nose. During this particular assault Haw received no assistance from the police who were standing opposite his camp.

Over the years Haw has won many awards for his long standing peaceful protest. He was named Most Inspiring Political Figure in 2007 at Channel Four’s political awards. He has also had his original display reproduced and displayed at the Tate Britain, which then won the coveted Turner Prize. Haw has also had a major documentary film made of his protest called A Man Called Brian that has been show at many international film festivals.

In a country where public trust in politicians has reached an all time low Brian Haw is seen as someone to be proud off. Continual harassment by politicians, the police, and some members of the public has not deterred him from making his stand. For Brian Haw it is a matter of protesting for as long as it takes.

As Haw himself says, “I want to go back to my own kids and look them in the face again knowing that I've done all I can to try and save the children of Iraq and other countries who are dying because of my government's unjust, amoral, fear - and money - driven policies. These children and people of other countries are every bit as valuable and worthy of love as my precious wife and children.”