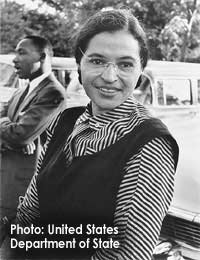 Women have often been forgotten about in the fight for civil rights and in most cases the famous civil rights leaders that have been documented were men. However, women played a vital part in gaining equality and were an intrinsic part of the civil rights movement.

In many ways women were the unsung heroines when it came to the struggle for civil rights in America. It has only been in recent years that the role women played in the fight for equality has been fully acknowledged. African-American women during the 1950s and 1960s, the height of the civil rights movement, had double the prejudice to contend with; they were black and they were women. There were not many women at this time that held high level jobs or leadership roles so prominence in the movement was often taken by men.

Women in the Movement

Rosa Parks, the African-American who was arrested after not giving up her seat on a bus to a white man is one of the most famous female figures in the movement. But she was one of thousands of female activists who played an important part in the struggle for equality. Any pictures from this era of demonstrations and riots will show women as well as men being arrested and violently abused by the authorities. Many of these women risked and lost their lives for the movement; they were there but they were simply not given as much prominence as the male activists.

Noted Women of the Movement

The list of women that helped during the civil rights movement would be very long. A few examples of the female civil rights activists would include Ella Baker, Fannie Lou Hamer, Septima Poinsette Clark, Harriet Tubman, Linda Brown, Coretta Scott King and Mary McLeod Bethune. These were women whose work and accomplishments changed the lives of many for the better. These are only a few of the women who fought and risked their lives side by side with the men in the civil rights movement.

One example of the inspirational women of the civil rights movement would be Fannie Lou Hamer. Famous for saying, “I’m sick and tired of being sick and tired” Hamer worked as a Mississippi sharecropper. In 1962 she was beaten and then jailed simply for trying to register to vote. Hamer’s act meant that she was thrown out of her job and she received continual death threats. Undeterred, Hamer became field secretary of the Student Nonviolent Coordinating Committee and travelled the country speaking in public and encouraging people to register to vote.

The original civil rights bill proposed by Kennedy did not have a sex discrimination prohibition amendment. This was added by Howard W. Smith an opponent of the bill who thought that adding women’s rights to the bill would stop the bill passing through congress. The National Women’s Party had been strongly promoting this amendment through allies in congress. On the 2 July 1964 the Civil Rights Act 1964 was signed giving equal rights for all including women.

The NWP was founded in 1917 with the aim of promoting women’s rights especially when it came to the same voting rights as men. The women of the NWP were the first to picket for women’s rights in front of the White House. Many of the members of the party would be arrested, stage hunger strikes and go to jail for fighting for the right to equality. The Suffrage Parade of 1913 and the subsequent protests led to President Woodrow Wilson calling for the Suffrage Amendment to be passed through congress. Within 70 years almost 300 pieces of legislation were passed through congress thanks to the NWP granting women equal rights.

Britain had its own group of women fighting for voting rights as far back as 1847. The popularity of the movement exploded in 1903 with the formation of the Women's Social and Political Union, later known as the suffragettes. The union would use extreme methods such as chaining themselves to railings and arson attacks to highlight their case. Emily Davison died as she rushed to bring down the King’s horse in 1913. By 1918 women over the age of 30 were granted the right to vote and ten years later the age limit was equalled with men’s voting rights.

The part that women played in the history of the civil rights movement is undeniably important. Many risked and lost their lives for rights that most people now take for granted. The courageous acts of these women have afforded men and women throughout the world the right to equality and freedom without discrimination.

The Fight Against Racism
Share Your Story, Join the Discussion or Seek Advice..
very well said indeed roger, i applaud your honesty, i too am quite tired of women getting far more lenient jail term's for the same crime if it were commited by a man, let me know when your website is up and running and i'd be honoured to contribute to and endorse the notion that equal means equal! or is it just the money they seek? we shall see!
Dr Patrick Mcalliste - 11-Jan-13 @ 6:36 PM
i'm about to set up a website dedicated to equal right's for women, EQUAL PAY/SALARY IN THE WORK PLACE AS MEN EQUAL JOB OPPORTUNTIES AS MEN EQUAL JAIL TERMS AS MEN i've just about had enough of women getting less!
rodger - 11-Jan-13 @ 6:22 PM
Title:
(never shown)
Firstname:
(never shown)
Surname:
(never shown)
Email:
(never shown)
Nickname:
(shown)
Comment:
Validate: